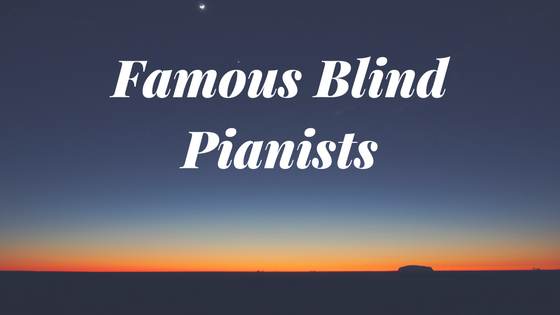 Music transcends beyond boundaries, race, generation, and apparently even handicap. There are numerous talented musicians throughout history who have made a lasting legacy in the world in different fields of music and many of them were blind. Most of them were blind pianists who have done a lot in various genres of music and have gained popularity worldwide. Here are three of the most famous blind pianists that have made a huge accomplishment in the music industry.

He lost his eyesight at the age of 7 and had to use his renewed sense of hearing to become adept with the world that he lived in. He started playing the piano at a very young age and was a self-taught musician who was orphaned at 15. He went on to win world accolades for his southern blues music style.

Many people, including famous and accomplished musicians, consider Ray Charles as one of the best and most talented musician in the history despite his handicap. Frank Sinatra said Ray Charles was “the only true genius in show business”. In 2002, Rolling Stones ranked Charles number ten on its list of the 100 Greatest, and number two on their November 2008 list of the “100 Greatest Singers of All Time.”

Stevland Hardaway Judkins known in the world by his stage name, Stevie Wonder, is another American born artist who was blind as a child. He was born in Saginaw Michigan and was reared by a very protective and caring mother. Little Stevie, as he became known, would play the music day in and day out and would later become one  most critically and commercially successful musical performers of the late 20th century.

Stevie Wonder was a child prodigy and spent majority of his youth mastering different instruments like the piano, harmonica and drums for. He achieved more than 30 U.S. top ten hits and garnered 25 Grammys, one of the best for male solo artists, and has sold over 100 million records worldwide.

Ronnie Milsap is a famous country music artist from the US who found his calling for music when he was sent by his grandparents to the Governor Morehead School for the blind in Raleigh California after her mother abandoned her as an infant. His talents for classical piano was quickly recognized at Governor Morehead and soon found his passion in country music.

Ronnie Milsap was one of the country music’s most iconic performers back in the in the 1970s and 80s. He became one of the most influential and versatile country “crossover” in his generation, taking over both country and pop music markets with unique songs that combine pop, R&B, and rock and roll elements. He has garnered six Grammys and forty No. 1 country hits and was inducted into the Country Music Hall of Fame in 2014.